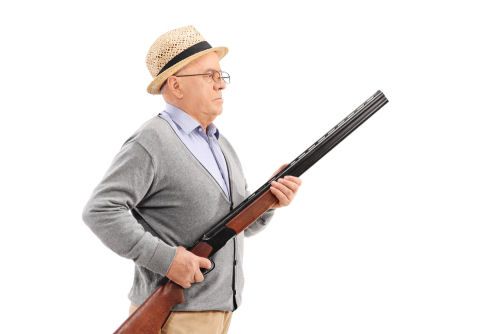 Ron was a retired police officer who had recently been diagnosed with Alzheimer’s disease. He lived with his son Dave and daughter-in-law Carol, in an in-law apartment attached to their house. Although Ron’s symptoms were mild and he still participated in social activities, Dave had become more concerned about his father’s firearms. As a former law enforcement officer, it was second nature for Ron to carry. He had a concealed carry permit and several firearms.

“I worry about what’s going to happen down the line,” Carol said to Dave one night. “It makes me nervous that your dad still carries a revolver sometimes. Don’t you think it’s better if all his firearms are kept in a safe and he doesn’t have access to them anymore?”

Dementia and gun safety is a topic seldom discussed in caregiver groups. Gun ownership can be a controversial topic. However, older adults are more likely to own a firearm than a younger person. Besides the risk of an accident, suicide is another concern. Among men in the United States, the suicide rate is highest among those age 65 and older, and firearms are the most common method used.

Some families opt to let a senior keep a weapon as long as it’s unloaded and ammunition is hidden or kept locked up, or the firearm has “dummy rounds” or is replaced with a realistic decoy, but these approaches have serious drawbacks. A person with dementia, brandishing a gun – even if it’s unloaded, or it’s a realistic decoy –  can be terrifying, and a potential law enforcement response can be deadly.

More than a dozen states have passed “red flag” gun laws, which allow law enforcement to seek a court order and temporarily seize firearms from a person who exhibits dangerous behavior. But ideally, the family will talk to the senior about guns before they become an issue. Similar to the conversation families and health professionals may have about driving and dementia, a discussion about gun ownership and safety is just as important. Some families prepare a plan ahead of time or work with an attorney to draw up a “gun trust” that specifies when firearms will be sold or passed to other family members when it’s deemed unsafe for the owner to keep them.