When Mom or Dad Move in: Resolving Family Conflict 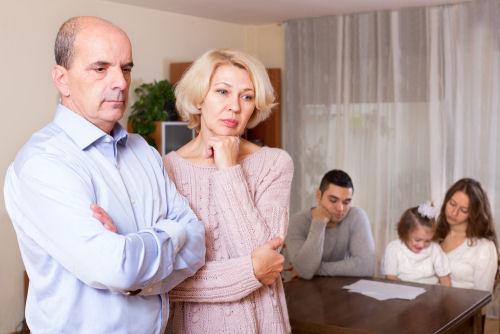 Every family has its own unique history, rules, and secrets. In my experience, conflict can easily erupt when families are in crisis or transition. This was the case with Janice and her siblings when their father, Ed, could no longer live alone.

Janice had hired me as her father’s care manager when he was first admitted to rehab after being hospitalized for a stroke. He did well in rehab but no one in the family felt comfortable with him being discharged to his apartment. I investigated assisted living facilities but ultimately, Janice and her two sisters decided that he would move in with Janice, her husband, and their teenage son. His year-long lease was up anyway. Janice’s two sisters promised that they would do all they could to help out.

There were problems right from the start. First, there was the issue of her father arguing about the temperature in the house all the time. He was either too hot or too cold and he was always monkeying with the temperature settings. He expected Janice to drive him to all of his medical appointments, even though she had a full-time job. Since her husband and her sisters worked too and couldn’t drive him, Janice often ended up paying for an Uber or a taxi. Her father was tight-lipped about his finances and rarely offered to pay for food, gas, or incidentals, and Janice felt guilty asking him to contribute. He also often butted heads with Jake, his teenage grandson, criticizing him and his friends for having tattoos. He even argued with Janice’s husband, berating him for not mowing the lawn often enough. At first, everyone tried to shrug it off, but after a while, the tension in the house took a toll on them all.

“Jake doesn’t even want to be at home anymore,” Janice said to her sisters, hoping they would intervene. But they seemed relieved that Janice had taken on this responsibility and to Janice’s dismay, they seemed to be distancing themselves even further. It all came to a head when after a particularly difficult night with her father that led to a fight with her husband, Janice screamed at her sisters on the phone and accused them of placing an unfair burden on her.

Janice asked for my guidance, and she also requested me to facilitate a family meeting. In her opinion, something had to change for the wellbeing of her marriage and to restore peace in the household, although she was still willing to let Ed stay.

As a care manager, my role isn’t necessarily to “fix” long-standing family problems but to ensure that each person feels heard and understood and to come to an agreement about caregiving responsibilities. In the meeting with Janice and the family, I facilitated a productive discussion about the care and support their father needed, not just in the present but also in the future. What would happen if he had a health crisis and another hospitalization and Janice couldn’t care for him? We reviewed the options for long-term care and came up with a plan to explore assisted living facilities. We also talked about the social and recreational outlets that were available for her father, who admitted he was bored and needed something to do.

When one sibling takes on the lion’s share of caregiving, that person needs respite care to avoid emotional and physical burnout. The sisters agreed to a plan that allowed for paid help when needed, and we also explored ways for Janice to be reimbursed for her father’s expenses.

Taming family conflict isn’t always easy. The ultimate goal is to encourage family members to be on the same team in caring for the older adult and to keep moving forward.

If you are struggling with questions about the care of an aging parent, please reach out to us at 703.723.3737 or at megan@goldenpondvirginia.com and we will be happy to assist.

Keep in touch with us through our Facebook page: